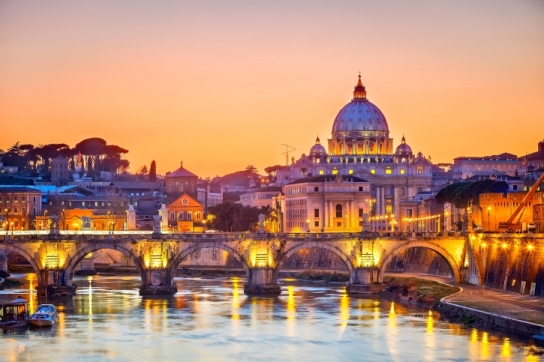 Rome is a bucketlist favourite and at Worldcare we know that there are so many opportunities to include when travelling there. We’ve compiled our ‘must see and do’ list to help with your holiday planning. Read on to discover the best experiences available in this historic city.

Must read: Angels and Demons

This book provides an insight into the history and legends of the city and its numerous landmarks -both religious and symbolic. Read this before you go as it’ll provide you with a much richer knowledge of the city’s attractions and you’ll appreciate what you see so much more once you are there.

Located in the Vatican city, the chapel is currently used for Papal Concave, which is the process undertaken to select the next pope. The chapel is most famous for Michelangelo’s ceiling artwork and The Last Judgement.  The paintings feature the ancestors of Christ and second coming of Christ. To understand the meanings of the artwork and learn more about the details of how the artwork was achieved take a walking tour with a local guide or hire an audio device.

Must do: Throw a coin into the Trevi fountain

Built between 1732 and 1762, this Baroque fountain features Ocean (the God of the Sea), Abundance (holding the horn of plenty), Agrippa (on the left – commanding troops) and Health (right arch holding a cup that snakes drink from). When you visit the fountain you will see many people with their backs to the water, tossing a coin over their shoulder, as legend has it that if you throw a coin into the fountain you are guaranteed to return to Rome, which you’ll no doubt want to do.

The largest amphitheatre ever built in ancient Rome (construction completed 80AD) once held 50,000 patrons of gladiatorial contests. The structure has worn down over the years due to stone robbers and earthquakes; however what remains is still incredible in its size and for its architectural feat. The best time to photograph is just after the sun has gone down and the internal lights shine out of the arches of the structure. If you want to avoid people or vehicles intruding on your photo and don’t mind getting up early then heading down at dawn will allow you to capture the soft light and stillness of the morning.

The world’s largest unreinforced concrete dome is found in Piazza della Rotonda. Completed in 126AD the Pantheon has a nine metre circular opening (Oculus) to allow in natural light and the flooring has discreet holes below this opening to allow rain to ‘disappear’ without a trace. It is now home to the tombs of two former Italian Kings and one queen, and mass services are held here each week.

Must drink: Coffee in Piazza Navona

This long rectangle-shaped piazza was built in 1st century AD to for the purpose of performing and watching games and competitions. It features the central Fontana dei Quattro Fiumi (Fountain of Four Rivers) plus fountains at the southern and northern ends (Fontana del Moro and Fountain of Neptune respectively). Surrounding the square is a number of restaurants, cafes and bars where you can take the time to soak up the atmosphere and enjoy a spot of people watching. However check first if service charges apply as the cost of a meal in the piazza can be considerably more than restaurants in nearby laneways. At Christmas time the square comes alive with Christmas market stalls selling toys, nativity figurines and hot food including roasted chestnuts.

Denser and containing less fat than ice cream, gelato was first made from snow bought down from the mountains and preserved underground. Rome has a large number of local gelato artisians and you can distinguish these from chain stores by the sign ‘Gelaterie Artigianale’. These stores will only use fresh ingredients, natural colorants, thickeners and flavours. Have a look around central parts of town to see which are frequented by locals and ask for the most popular flavours.

Be careful where you stop to lick (and drip) your gelato. New city council laws dictate people are prohibited to eat gelato, sandwiches and other snacks around historic statues, monuments, fountains and architecture. Fines can range from 25 to 500 euros so it pays to remember this new rule.

Piazza di Spagna is home to the Spanish Steps and Bernini’s Barcaccia Fountain – a monument that represents the flood of River Tiber in 1598 with a sinking ship. The rising Spanish Steps  make the perfect resting stop to admire the surrounding ochre-coloured buildings and have a chat with friends. Rising at the top of the steps is Trinità dei Monti church, built in 1502. If you are inclined for a spot of shopping the nearby area, including via Condotti and Via Borgognona, is home to many Italian designer boutiques.

South of Piazza di Spagna and in the laneways between Via del Corso and Piazza Navona you will find dozens of great restaurants and takeaway stores offering authentic Italian pizza. In the local dialect ordering a slice of pizza by weight is called Pizza al taglio. For the most celebrated pizza chef try Gabriele Bonci’s Pizzarium, famous for its slow cooked dough made of spelt and an amazing range of toppings – all available by the slice.

We’re sure the top tips will have made you even more excited about your Italian adventure. Be sure to come back and post comments on the sites above when you return home and don’t forget to grab travel insurance before you depart New Zealand.