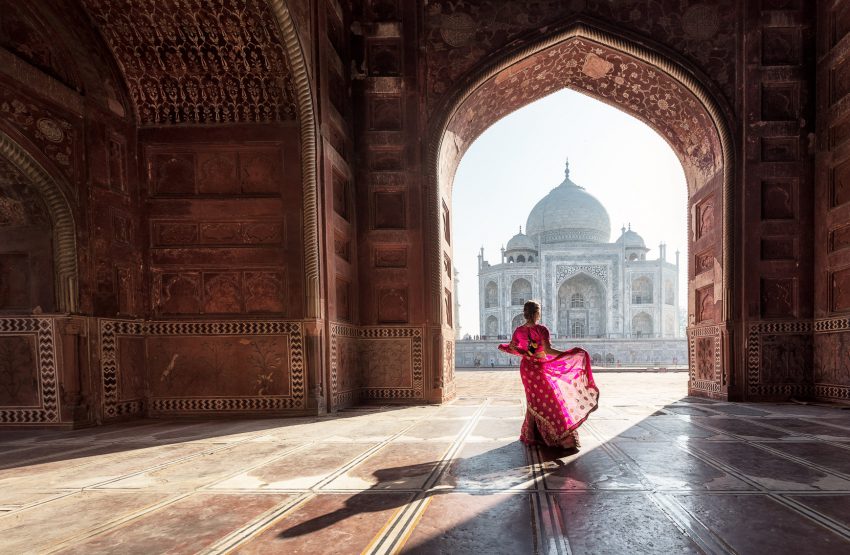 When it comes to travel, there aren’t many more exotic and transcendent destinations than India. A colourful country full of tradition and vibrant sights to see, the Golden Triangle of India is a must do travel tick-off for every travel enthusiast, intrepid or not. With unparalleled culture to explore and celebrate, you’ll leave India revived and full of zest for life.

To make the most of your trip, it’s always best to do your research into where you want to go, and what you want to do when you get there. Like witnessing the majesty of sunrise at the Taj Mahal, there are countless memorable experiences are waiting to happen. Discover some of our favourite highlights from around the Golden Triangle of India, to help get your travel plans underway.

The Golden Triangle of India is the perfect introduction to the sights of India to give you a taste of the rich culture and buzzing atmosphere. Tracing the three spectacular destinations Delhi, Agra and Jaipur, this famous trio is home to some of the world’s oldest and most iconic destinations. We’d recommend allowing at least eight days to soak up all that the heart of India has to offer.

The bustling capital city has a unique thriving pulse unlike anywhere else in the world. Whether you’re up for a bit of shopping around the many markets and bazaars, or you’d rather learn some history at ancient forts and monuments, Delhi is a trove of fascinating new experiences and inspiring sights to see.

The Red Fort. The most well-known monument in Dehli is the colossal Red Fort. Built by the fifth Mughal emperor Shah Jahan in 1638 when he moved the capital city from Agra, the Red Fort has an intense story and stands as a symbol of India’s struggle for freedom. To really surround yourself with history, experience the one-hour sound and light show which illuminates the turbulent past of the fort every evening. That’s perfect timing, because this grand old stronghold is at its best around sunset, when the striking red rock and marble complex is set ablaze by the final rays of the day.

Chandi Chowk. Immerse yourself in some of the oldest and busiest markets in India. Chandi Chowk is the main street of old Delhi, a busy hub of narrow lanes full of jewellery, clothes, fabrics, and electronics. You’ll be sure to walk away with a few bargains and a fresh perspective on life after a couple of hours exploring this chaotic yet charismatic part of town. If you have a strong stomach, it’s also home to some of the best street food in the country that should not be missed.

Tourists flock to Agra to see the magnificence of the Taj Mahal and when you stand before it yourself, you’ll see why. Situated on a bend on the holy Yamuna River, Agra is home to some of the world’s most iconic heritage sites that will take your breath away.

Although it’s an unmissable stop on your journey through the Golden Triangle, the persistence of the rickshaw-wallahs and unofficial guides can be daunting as you make your way around. Luckily, two of the biggest attractions are a mere 2km apart from each other, so we’d recommend getting a hotel nearby or just visiting from Delhi for a day trip.

The Taj Mahal. It wouldn’t be a “top sights to seein India” list without mentioning the mesmerising Taj Mahal. This is a hotspot for tourists, all after a glimpse of one of the Seven Modern Day Wonders of the World. Dating back to the 1630s, the immaculate ivory white mausoleum is actually a tomb for the wife of Mughal emperor Shah Jahan. It took 22 years and 20,000 workers to complete and was the ultimate gesture of love. When it was built, Emperor Shah Jahan said it “made the sun and moon shed tears from their eyes.” Crafted from marble, the awe-inspiring detail has to be seen to be believed.

It’s no secret that it’s always flooded with tourists, especially at sunrise, so get there early. Don’t bring big bags with you as this will only slow you down in the line. To see the wondrous monument from a quieter spot across the river,visit Mehtab Bagh (the Moonlight Garden) and enjoy marvelling from a more peaceful setting.

Agra Fort. The largest fort in India was oncethe main residence of the emperor during Agra’s era as the capital of India.Within its red sandstone walls, Agra Fort holds an entire city of mosques,monuments, and palaces. Offering a divine view of the Taj Mahal from thebalcony, the Agra Fort has its own beauty and fascinating history to discover. It’s a testament to the incredible fortitude and grandeur of the Mughal dynasty, which ruled India for over three centuries. A fabulous structure inits own right, don’t let the Taj steal the limelight completely and allow a couple of hours to explore this incredible walled city.

Known as the Pink City for its pink walls and buildings, Jaipur is the alluring capital of the flamboyant state of Rajasthan. This stunning combination of old and new captures the vibrancy for which India is known, offering urban pockets of shopping alongside ancient forts and palaces. Many of the old city’s top sights can even be seen on a DIY walking tour with forts, bazaars, and palaces to explore. We’d recommend taking a few days to explore Jaipur.

Amber Fort. This grand building sits on top of a hill overlooking Maota Lake which reflects the glorious structure from below. This is another picture-perfect place to take photos with its symmetrical archways, turrets, and serpent-like staircases. There’s even elaborate mirror work that shimmers in the sunlight. Allow a couple of hours to cover all the palaces, gardens, and temples within the walls of this extraordinary complex.

Jantar Mantar. Jaipur is home to one of the oldest astronomical observatory sites on the planet. Built in the 1700s, Jantar Mantarhas since been declared a UNESCO World Heritage Site and is a unique must-see to add to your trip. The 14 structures that make up the observatory all have a specialised astronomical function – tracking stars, measuring time, and predicting eclipses. One of these is the gigantic sundial, 27-metres high and measuring time in intervals of two seconds. A trip to Jantar Mantar will have all inquiring minds thinking about the developments in timekeeping, science, and astronomy we’ve made over the centuries.

Visiting the Golden Triangle of India

A world of rich tradition and vibrancy, this is a country built on layer after layer of history. Now that we’ve highlighted some of the top sights and experiences of travelling to the Golden Triangle of India, you can start planning your own life-changing adventure. Just be sure you protect yourself against unforeseen events by taking out travel insurance. A cultural sensory overload awaits all who dare travel to this noble land full of colour and unexpected experiences. You won’t return home quite the same.

Read the Policy Wording and request a quote for Worldcare.