Jetlag really is beastly. To arrive at your holiday destination only to find yourself drooping into your lunch, or curling up for an afternoon nap and waking at 2am, completely disoriented and unable to get back to sleep again until lunch the next day – it’s not the ideal way to start a vacation. And yes, after a day or two, or three, or four, you will come right, but if you’ve things to do, places to go and people to see, you will not want to spoil the first few days of your holiday with topsy turvy sleep patterns.

So what is jetlag? 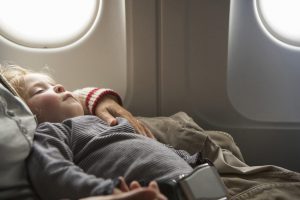 ply put, jetlag is the extreme exhaustion experienced by people who have flown long distances across time zones. This disrupts the body’s natural circadian rhythms and can also be known as ‘time zone change syndrome’ or ‘desynchronosis’ – although jetlag sounds much jauntier. The French sometimes call it le décalage horaire which translates as ‘the shift in schedule’ which has nothing to do with horror as it might first look.

And, in rather disheartening news, the symptoms only get worse as you get older. So if you’ve been visualising a retirement brimming with international travel, maybe you should consider traveling by cruise ship where the effects won’t be felt – and what’s more, if you shop around, a cruise can be cheaper than a rest home.

But if you can’t avoid it, here are a few simple tips to help you recuperate as quickly as possible from the dreaded ‘lag.

1. Adapt to the new zone ASAP

Try to lock into the new time zone as soon as you can, from the time you step on the plane or even earlier if you can manage it and set your watch to that new time and start working to it. If you’re travelling east to west, some experts suggest going to bed and waking later a few days before setting off, and doing the opposite if travelling west to east.

2. Straighten up and fly right

This rule is often hardest to stick to, but try not to watch too much TV en route, don’t drink a lot of alcohol or caffeinated drinks and try to stay hydrated with good old fashioned water. Although that’s easier said than done because when many of us fly, we’re usually so excited to be going on an adventure that we want to eat, drink and be merry more than usual – and watch as many movies as our gritty dehydrated eyes will allow. And I usually like to accept every cup of coffee I’m offered on a long haul flight, mainly as a way of killing time – but this is not a good idea, especially if you’re landing at night.

Some frequent flyers swear by obtaining a small supply of sleeping pills before jetting off; but do please be careful if you are also drinking alcohol or if you might be at risk of developing Deep Vein Thrombosis (DVT). You want to move around at least enough to keep your circulation flowing. This is why some flyers recommend limiting the sleeping pill consumption to when you’re at your new destination, and you’re going to bed with hopes of sleeping right though the night. Another popular medication for combating jetlag is melatonin, a hormone that anticipates the daily onset of darkness. Although the efficacy of Melatonin is yet to be categorically proved, and some studies claim that if it’s taken it at the wrong time, it can actually make sleep harder to achieve. Other critics say it merely has a placebo effect, so with the jury out on the genuine benefits, whether or not you take melatonin is purely up to you. 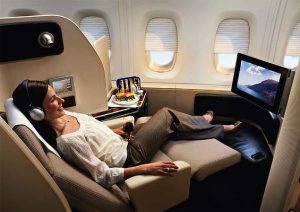 And my favourite method – if you can afford it – pay for an upgrade either to premium economy or business class because the chance of sleeping properly in the roomier, classier, groovier parts of a plane is amazing. In fact, when flying first class, you will probably arrive feeling even better than when you left and you might also be reluctant to exit the aircraft. Ever.

Switch off the electronic devices, snuggle down and try to get into the new time zone as soon as you’re able. Drink plenty of water, don’t get stuck into the beer, wine or coffee and, if you’re thinking of taking sleeping pills, use them wisely. And don’t forget to play it safe because it’s also time to think about travel insurance in the face of unexpected loss or illness. So be sure to investigate Worldcare’s low-cost, high quality travel insurance options for your next long distance trip.